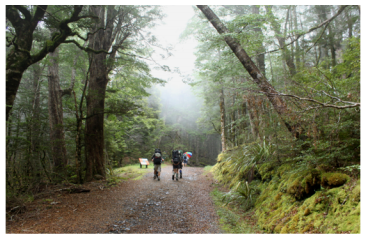 
Start your writing here.
“Kait are you ready” said Sam, Kaitlyn and Sam where two ordinary Teenagers. They were going on a camp in the Mountain river hills where they were going to hang out with their friends Molly and Patrick. So off they went by the time they had reached the forest night had already fallen so they quickly set up their tents and went to sleep.


The next day they all went swimming in one of the rivers near from where they had set up their stuff. At nighttime they all toasted marshmallows over their fire which they had made out of wood. While they toasted marshmallows they told scary stories and one of the stories Molly told was about a man who lived in the forest many years ago he was a serial killer murdering anyone who dares step foot in the forest. Kaitlyn got chills up her spine while Sam nearly fell asleep. After a while they all got tired and went to sleep but Kaitlyn was still shaken by the story and couldn’t go to sleep but eventually after a while she slowly dozed off to sleep.


A Sunny day had come on by and the group thought of taking a hike through the forest when they had came back Kaitlyn soon realised she had left her watch in the forest. So she went out by herself to go and get it  from a distance she saw something glinting in the trees as she obliviously walked closer to it she saw a man standing holding her watch while behind him grew a slow and angry purple sky making him seem super scary. She asked the man “Excuse me is that my watch” He replied in his wretched old voice “This one ohh I think it might be” “Yes that one may I have it back please?” Said Kaitlyn in her tiny petite little voice. The man chucked it near her feet and when she bent down to pick it up he had disappeared.

She thought that he might have been the crazy serial killer but she never had the courage to ask. Now she will never know if that was him or not. Kaitlyn has never told anybody about that time from this day since.
Posted by Ariana at 12:15

Who is visiting this blog?

Kia ora na my name is Ariana and I’m a year eight student at Pt england school. This year I’m in room 3 and have the beautiful teacher Mrs Tele’a . My favourite foods are Pizza and ice cream. Some of my hobbies are netball,swimming, designing,creating and art. I love to dance and act. One of the things I love doing most is learning different languages I can speak a little cook island, nz maori,tahitian and I know a little French too. Did I mention I’m also a prefect?